In Another Country: Teiichi and the Myth of Universality

I've never liked the popular myth that people are the same all over. If we believe we all want the same things, and will pursue those things in the same ways, then we can pretend that we already understand sufficiently each other. The false notion that we're fundamentally alike means we can stop trying to bridge the gap between "I sympathize with you" and "I understand you." It also means we're more intuitively sensitive than we actually are. Relax, stop trying so hard: you already get me.

Give me a break. Isn't "you and me, we're not so unlike" what the bad guy always says at the end of action movies...right before the bad guy is defeated?

I watched energizing Japanese high school comedy Teiichi: Battle of Supreme tonight, and thought about the false comfort that pseudo-elemental/universal characters give to viewers. Teiichi, an adaptation of Usamaru Furuya's popular manga comic book, is set in a specific milieu. True, the film's focus on cram school power-plays, adolescent political ambitions, grade-grubbing competitions, and extra-curricular brown-nosing will probably seem at least partly relatable. But Teiichi is, more specifically, a spoof of the competitive nature of Japanese high school culture. The jokes are, in that sense, as funny as they are because these characters are not really like people I know from my personal experiences. Rather, I was thrilled by Teiichi because it gave me a funhouse-warped reflection of what life in another country is like.

The film's title character (Masaki Suda) may be exceptionally driven. But his insatiable power-lust, and indomitable drive are also what makes him symptomatic of the film's world. Here's a rare teenager who knows exactly what he wants: to be the student president of Kaitei High School in order to become Japanese Prime Minister, and then leader of his own independent country. Teiichi fittingly details his ambitions, and motives during a comically blunt prefatory speech.

We see, during a belly-laugh-inducing flashback, we see how mild-mannered Teiichi used to be before he hit his head while practicing piano. After this personality-altering injury, Teiichi became determined to do what his father couldn't, and defeat his school nemesis Kikuma Tōgō (Shuhei Nomura), the son of his father's rival. To achieve his goal, Teiichi teams up with calculating wingman Kōmei Sakakibara (Jun Shison), and uses allies like naturally charismatic leader Dan Ōtaka (Ryoma Takeuchi) as stepping stones to defeat Tōgō, and get a few steps closer to being a world leader.

Teiichi is a fast-paced physical comedy, so viewers shouldn't expect a civics lesson, or a didactic breakdown of Japan's societal ills. Moreoever, the film's protagonists may be relatable, but only to a point. I knew kids like Teiichi in high school. I also mocked some of my peers by assuming they had Teiichi's levels of naked ambition. I've even feared I was becoming guys like Teiichi. I remember the kids who agonized over final presentations, but would always pull through with an A-. These were the teens who stayed after-school in order to prove their interest in whatever area of study they didn't already test 100% well on. 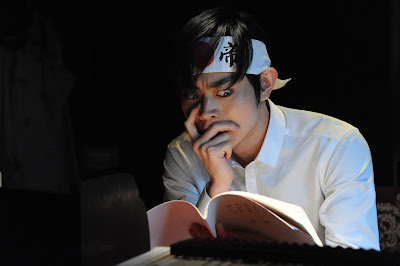 If you were close to students like this, you were probably close to being one of them. And if that's the case, you know what it's like to be programmed to be ruthless about your future. Maybe you had a summer internship because it looked good on college applications. Or maybe you ran an after-school club because it showed ambition. Maybe you ran your own newsletter,  or contributed to the school paper to show that you cared about your community. Or maybe you did intramural sports, or speech and debate to show that you had school spirit. Maybe you just listened to your guidance counselor when he or she tried to adjust your expectations by telling you which colleges were "reach"es for you, and which were safer bets.All of these things are relatively tame compared to Teiichi's ludicrous, and quite funny quest to be smarter, more well-versed, more ruthless, and more efficient than anybody else around him.

Still, it's important to note that Teiichi's ambitions are not abnormal in the context of Kaitei's student body. If anything, the fact that he's surrounded by like-minded students suggests that, after a certain point, we are all at least a different. Because one hormone-crazed wannabe Napoleon is funny, but a world full of them suggests that there's more to Teiichi than broad, caricature-style satire.

There's a screening of Teiichi coming up this Wednesday, November 8th, at Chicago's own Asian Pop-Up Cinema Festival. The festival is one of the best places to see Teiichi since festival organizer Sophia Wong Boccio makes each screening a fun, accessible opportunity for light, but meaningful cross-cultural exchanges. I served as the guest speaker at a recent Asian Pop-Up Cinema screening of Ann Hui's Our Time Will Come, and I was very impressed at the way Sophia has developed a community of engaged moviegoers. I am also very grateful that Sophia made me, a New Yorker visiting Chicago, feel like a party of her community. I learned a lot from that evening's Q&A, and felt a little less out of place.

For more information on Wednesday's screening, go here.
Posted by Simon Abrams at 10:02 PM No comments: