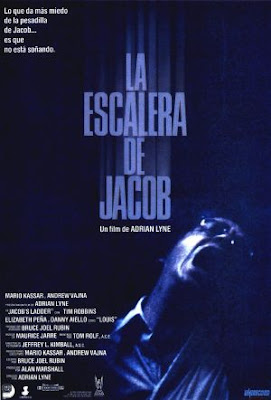 I fucking love this movie. See my lil cap on it for The L Magazine.
Posted by Simon Abrams at 10:57 AM No comments:

I Had a Dream, Joe 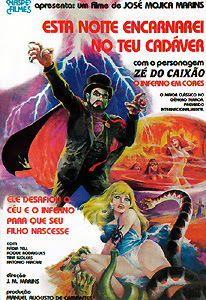 "This night," was the night of Superstorm Sandy. I was nervously puttering around my Bay Ridge apartment, listening nervously to the wind howl, and trying not to let the constant, threatening noise bother me. My roommate Bill and I tried to overcome our cabin fever by running across the street and ordering from Domino's. For some reason, Domino's was still open, though they didn't take credit card (they did have electricity though, so it must have been a computer thing).

I don't know if any of this is significant. I make a note of it now because I think the storm is part of my viewing experience. The mediocre pizza certainly tasted better because of it. Then again, I was also probably less receptive to Marins's second Coffin Joe film than I could have been. I could have sworn that our building was swaying a little...

Still, while I unreservedly love Corpse's famous Hell set piece--glitter, rainbow lighting, oatmeal sores make-up, copious bare flesh, and lotsa pained, pseudo-erotic groans really does it for me, I guess--the rest of the film struck me as a fine enough variation on At Midnight, I'll Take Your Soul, a movie whose sheer misanthropy is indelibly thrilling. Midnight was made by a sleaze artist on the verge of a major breakthrough while Corpse is a repeat performance of that same meltdown, albeit with some obvious improvements (there really is no beating that Hell sequence). Bound to rewatch it at some point...
Posted by Simon Abrams at 10:53 AM No comments: 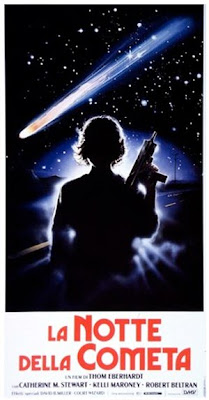 Don't have much to say about either of these two Halloween-appropriate picks. The Mutations is a goofy, fun monster movie, though its more novel ideas are mostly under-developed, and its pace is kinda all over the place. Still, Mutations is worth seeing if only for Donald Pleasence's characteristically excellent performance. Night of the Comet didn't do as much for me, possibly because I was distracted and/or drinking, and it's a dialogue-centric film. Some lovely visuals, though, and I do like that a film like this exists. Meaning: girls are allowed to be girls: they can split hairs, fight over boys, go shopping, be tough, and oh yeah, end of the world stuff, too. In other words, just because it's a movie for teen girls, doesn't mean it's a de facto frivolous film. While I found the film too light for my taste, I did appreciate that the film's melodrama was heavier than I feared it might be. I think I may need to rewatch Comet.

Posted by Simon Abrams at 10:18 AM No comments:

Email ThisBlogThis!Share to TwitterShare to FacebookShare to Pinterest
Labels: Jack Cardiff, Night of the Comet, Sharon Farrell, The Mutations

Drink, Drink, Drag Me Down! 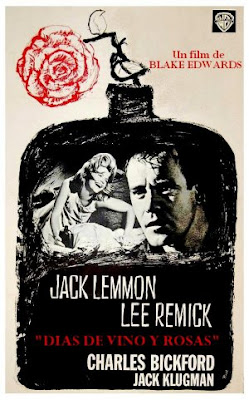 What a depressing bunch of movies to watch all at once. But they're so good, so I don't mind. Check out my list for The Playlist on Best Alky Dramas.
Posted by Simon Abrams at 10:52 AM No comments: 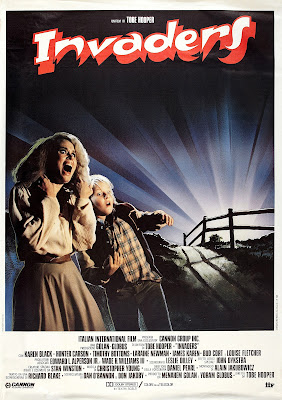 Three-fourths of this year's annual Halloween Movie Marathon (the missing film being Horrors of Malformed Men, briefly mentioned here). I can't take credit for picking either Chillerama or Dracula 3000 (those are Bill Best picks!). But I did sadly pic the Invaders from Mars remake. Because I don't really know better. So, basically:

Chillerama: This Troma-inspired horror-comedy anthology is pretty stupid, and totally reliant on high-concept gags that are vigorously run into the ground. But I mostly enjoyed these shorts' one-note jokes. Still, loopy performances from Joel David Moore (Adam Green's "The Diary of Anne Frankenstein," probably the best short in the bunch) and Ray Wise (Adam Rifkin's "Wadzilla") are what you should watch this portmanteau film for. Because honestly, who thinks "I was a Teenage Werebear" is an inherently hilarious idea? Don't answer all at once.

Invaders from Mars: like Lifeforce in that director Tobe Hooper and Dan O'Bannon seem to be grinding their gears hard without accomplishing much, though Invaders mostly blah while Lifeforce is just deliriously stupid. Also like Lifeforce, Invaders' juvenile, pseudo-tongue-in-cheek sense of humor, particularly during the alien scenes (it's all about sex, kids, look, even the aliens look like giant, evil gonads!), is consistently uninspired. The same is true during Invaders' relatively expensive-looking military scenes, which are just boring. Still, I can't say no to any movie that gives me so much sexy Karen Black goodness. Because wahoo, sexy Karen Black, be mine!

Dracula 3000: Has one or two preposterously bad moments of note, including Udo Kier's video diary log from the Daedalus, and a scene or two with Coolio in it. But yeah, I have nothing good to say about this film except that it ended.